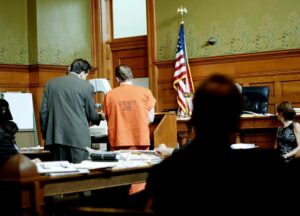 After a defendant posts bond, the legal process is far from over. The defendant still needs to appear at any scheduled court dates. Some individuals make the unfortunate decision to skip bail.
Skipping or jumping bail means that the defendant does not show up in court and does not contact anyone regarding the absence. The defendant may even leave town in hopes of avoiding arrest. It is important to understand the consequences associated with skipping bail so that you recognize why it should never be an option.

2. The Judge May Decide to Revoke Your Bail

Remember, the purpose of bail is to make sure that you appear at your future court dates. By skipping bail, you are basically telling the judge that the amount of your bail was not a sufficient financial incentive to motivate you to show up to court. When you miss your court date, the judge usually revokes your bail.
Your decision to skip bail will not weight favorably with the court. For future offenses, the judge may decide not to issue bail or your bail may be significantly higher since you have proven you are a potential flight risk.

3. You May Have to Forfeit the Amount You Paid for Bail

Not only can you lose the ability to even post bail, but you may have to forfeit the initial amount that you paid for your bail. Some defendants choose to use their home or other property as collateral when bonding out of jail; this property is subject to seizure to pay the amount of your forfeited bond.

4. Your Bail Bondsman Can Come After You or Your Financial Resources

Many defendants wisely utilize the services of a bail bondsman to post bail. Using a bail bondsman decreases the amount that the defendant has to pay out-of-pocket in order to get out of jail. However, if you skip bail, your bail bondsman remains responsible for the remainder of your bail.
You can expect the bail bond company to use a bounty hunter to track you down and return you to the court system so that it does not lose the money it posted. Some bail bondsmen require collateral, such as a home or vehicle. The bondsman can and will seize your property to recoup the money that you owe

What to Do If You Have Skipped Bond

Perhaps you have already decided to skip your court date or maybe you simply forgot when it was. Regardless of the reason, you need to take action now. Many jurisdictions offer leniency to individuals who turn themselves in within 30 days of the missed court date.
If you used a bail bondsman to post your initial bond, contact the bail bondsman as soon as possible. Your bail bondsman can work with you to help you get your bond reinstated so that you do not have to go back to jail. Time is of the essence; do not delay in establishing contact.

Do you need to post bail for a loved one? Contact AA Best Bail Bonds today to start the bail bond process.