You do not need an attorney to start the bond process

We are here to answer all of your questions about Dallas bail bonds.

For FAST bail bonds in Dallas, Texas, and surrounding communities, trust AA Best Bail Bonds for bail and jail release. We pride ourselves on being the experts in the field that you can rely on. When you or your loved ones need bail bonding services in Dallas and surrounding counties, we are only a call away. When you need help posting bond, getting a 24-hour bail bond or securing jail release, call 214-741-3500. At one point or another, everyone has to deal with circumstances involving the law. Ending up in jail, for some people, is the untimely and inconvenient consequence of the law.

If you or anyone you love is faced with this type of situation, your best choice is to call AA Best Bail Bonds in Dallas. We will work to get those you care about out of jail quickly. Our track record for honesty and integrity, along with our resourcefulness, helps us secure any bond or bail you need.

What is a bail bond?

Bail is money given to the court which allows the arrested to get out of jail between the time of arrest and trial.  Depending on the severity of the crime, the defendant's criminal history, and their flight risk, a judge will determine how much money will need to held by the court in order to allow a release from jail while awaiting trial.  This money is held by the court until a final verdict in the case is decided.  At this time bail is refunded to the defendant.    Typically this is a very large amount of money that most defendants can not afford. Fortunately, AA Best Bail Bonds of DFW is here to help defendants get out of jail without having to pay the full amount of bail.  If a defendant is able to pay as little as 10% of the bail amount, AA Best Bail Bonds will cover the other 90% in exchange for a fee and a promise that the defendant will return for court.
(Also see:  Wikipedia - Bail Bondsman )

What type of bonds does AA Best Bail Bonds offer?

Feel free to get in touch with our main office by phone or online to speak with a dispatcher about how we can best help you quickly. For your convenience, you can download bail bond forms prior to coming in for faster service. Necesitas fianza clic aquí. 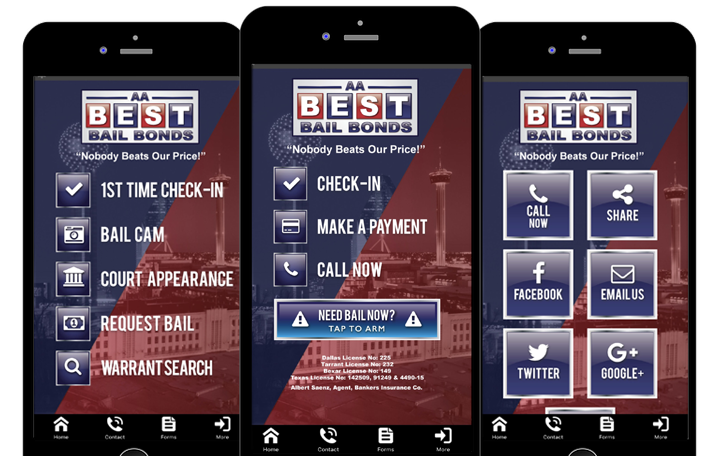 With our app users can:

What Our Clients Think

Best bails bond in corpus tey are extremely quick with an affordable payment plan, &friendly staff i recommend to everyone try this bails bnd 1st

AA BEST BAIL BOND HAS BEEN A BURDEN LIFTER IN MY LIFE, THEY ARE VERY UNDERSTANDING AND WILL WORK WITH YOU TO HELP MEET YOUR UNIQUE SITUATION. THEY ACTUALLY…