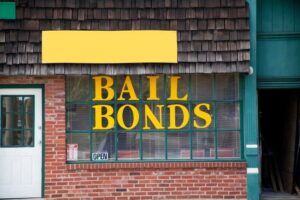 If you’re new to the bail bond process, it can be confusing. Alongside the stress of being in jail or posting a bond for someone you care about, the legal terminology is new to most people. To help you through this challenge, here are a few handy bail bond–related terms you should know.

There are several different types of bail bonds through which a person can secure release after arrest. These are generally divided up based on the method of guarantee or the type of criminal charge. The first group includes four basic types: surety bonds, cash bonds, personal bonds, and property bonds.
A surety bond involves a person who agrees to act as surety for the person in jail. The surety — typically a bail bondsperson — agrees to pay the full bail if their client does not complete the terms of the bail (called forfeiting the bond). The person serving as surety charges a fee for this service.
This type of bond is the easiest and most common bond method for most Americans — and the one most people refer to when talking about bail bonds.
A cash bond is made when the person pays the entire sum of the bail bond to the court. Upon completion of the terms, they will receive a refund of a portion (minus administrative costs). If they forfeit the bond, they forfeit the entire amount already paid. Obviously, this is a difficult type of bond for most people to pay.
A personal bond — also called a signature bond or being released on one’s own recognizance — is rarer than other bond methods because the defendant simply signs paperwork and is released with a promise to appear in court. This option is provided to those who are deemed not to be flight risks or risks to public safety.
A property bond occurs when you put property as surety for a bail bond. The court puts a lien on the property (which generally must have a much higher value than the bond calls for), so that it can take possession if you fail to show up for your court dates.

Other definitions of bail bonds are specific to the arrest or charge involved. These categories are generally delineated based on the specific crime or legal difficulty the person finds themselves in.
For example, a person arrested by Immigration and Customs Enforcement for immigration-related offenses would need to get an immigration bond. Despite the different terminology, this bond works similarly to surety bonds as explained above.
Federal bonds — as their name suggests — are required for those arrested for more serious federal charges. Federal bonds are a little different than state bonds because they aren’t subject to the same state limitations. Federal judges set the terms for a federal bond, and the premium may be higher.
What happens if a person is arrested while far from home? They may be subject to a transfer bond. With a transfer bond, your bail bond service will coordinate with one in the jurisdiction where the person was arrested. This means that the family or friends dealing with bond process can stay in the local area and handle everything.
A transfer bond is more complicated due to the distance and laws of other counties or states.
By understanding some of the basics as to how different bonds work, you can navigate the process more easily and more successfully. For help with all your bail bond needs in Dallas and the surrounding areas, call the experts at AA Best Bail Bonds today.